Yesterday we attended a service in memory of my friend and coworker Clark Blakeman. Clark and I have been friends and involved in work together for nearly a decade. On December 21st he went to be with Jesus after a long battle with cancer. As I’ve reflected on his life during the past couple of weeks I’ve thought about some of the things I learned from Clark over the years.

Clark was a genuinely unique listener in conversation. He’d sit down with you and be fully interested in who you were and what you were saying. The crazy thing was that Clark was also an intense “doer”. It can be hard to be both a listener and a doer. Often people who are driven and accomplish a lot of things can tend to treat you like a prop in their project. Clark was able to listen when I talked to him and not treat me like an object. But then he was able to remember our conversations and put all of the pieces together to accomplish good and beautiful things in life. I want to be a better listener and to love people for who they are – not just what they can do for me.

In recent years Clark was really active with the Asset-Based Community Development movement. That is a mouthful of a phrase – but essentially it comes down to the idea that you enter into a community and identify their strengths rather than their weaknesses. For anyone hoping and working for change in a community – our default mode usually is to walk in as an outsider and say “Okay! What needs fixed?”. Many times that approach forces the outsider to be the savior and it undercuts the strengths and the motivation of the local community. After seeing the incredible value in this approach taught by Clark – I now come into community development work with a totally different footing. After meeting new people and getting to know a community I ask “Okay! What are the gifts and resources already present here?” Then I ask “What are some of your ideas for creating change in this community?” That shift in approach makes all the difference. Every person is valuable because every person is made in the image of God. Everyone has 24 hours in a day. Everyone has ideas. Everyone has love to give and receive. It just makes sense now that assets and gifts are identified first rather than last or not at all.

Dedicate yourself to the King and his Kingdom

Clark was a follower of Jesus Christ. It was impossible to know him and not know this fact about him. He lived with this conviction and faith in every sphere of his life. I haven’t known Clark nearly as long as his family and many of his friends. But it was uniformly confirmed that once Clark was transformed by the gift of salvation and eternal life by Jesus he never looked back. He dearly desired for all people to grow in the knowledge of Jesus. And he wanted to pattern his life after Jesus and share hope, love, and blessings with everyone he met. His spiritual life was not merely relegated to his home or his church. He was convinced that the good news of Jesus was good news for the public square as well! I really grew in my personal life observing the vibrant and comprehensive spiritual life that Clark demonstrated. He was totally dedicated to the King (Jesus) and his Kingdom (God’s reign in heaven and on earth). In his journey he never looked back.

I wrote about this a couple of weeks back on my blog. Clark did not whine. He went through some great things in life and he also had a number of setbacks. It’s very popular now to publicly whine about the problems and setbacks of life – both large and small. I had a rough year last year and found myself whining at times and forgetting God’s blessings and hand in my life. But Clark’s posture of gratitude encouraged me in my life (and in the life of our community). He helped turn our attention to the gifts of God rather than focusing on the setbacks that we were facing. And Clark did this while suffering from major health problems in his battle with cancer! It was hard to argue against his words! I’ve found myself much more grateful in life because of my relationship with Clark. It is an area I still need to keep growing in. But I know that genuine gratitude toward God is possible in the very darkest of times.

My generation (and those who are younger than me) are into individualistic and self-centered spirituality. We are spoiled by numerous choices and by a spiritual culture that is heavily influenced by consumerism – “The customer knows best!” It’s produced a lot of disgruntled Christians who either stay at home and practice spirituality in their backyards or in other cases they drive an hour or two to discover a church that caters to their needs. Clark loved the local church. He encouraged people to be an active part in their local church community. And for Clark – a local church was a church in your geographical neighborhood. It was made up of young and old. It mirrored the ethnic diversity of the population. It often was awkward and unpolished.

This is some hard stuff! Our family still drives 20 minutes to attend church. But Clark encouraged those around him to be a part of a local church and to not fuss about how the church wasn’t catering to our needs. U.S. president JFK encouraged people to “ask not what America can do for you – ask what you can do for your country.” In our time we bristle at this personally unfulfilling and unglamorous teaching! But we need this approach now – not only for our nation but in our local church culture as well. We have to take our eyes off of ourselves and think about how we can serve and be a humble presence in our local church. We have to stop demanding that the whole system exist to cater to our own needs and preferences. 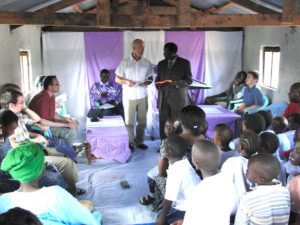 As my friends and I were starting the ministry Lahash over a decade ago we found ourselves struggling to find our voice as a team. We wanted to follow Jesus. And we wanted to serve and love people in East Africa. In those early days we had a lot of people wanting to share their opinions about what the ministry should look like. Conservative friends were wary of our work with community development and caring for people’s physical needs. Liberal friends were often wary of our efforts to tell people the Good News of Jesus and work toward spiritual transformation. Many people were so frustrated that they walked away from the team. If we zoom out to see the bigger picture – we observe that this conservative/liberal divide in the United States has been raging for over 100 years. Conservative Christians often have been laser-focused on preaching the gospel and saving souls. Liberal Christians have often been more interested in service projects and social justice.

In the early days of our ministry Clark was on our board at Lahash. He and fellow board member Doug Hazen helped our team find our clear calling from the life and teachings of Christ. Jesus preached the good news of the Kingdom of God. But he was also involved in loving acts in the lives of the people around him. Clark actually preached a sermon about this in 2007 at Imago Dei Community. It was called “The Symmetrical Expression of Christ’s Life”. Clark was convinced that in order to have a full and healthy spiritual life that we must pursue and display both of these attributes in our personal lives and in our churches and ministries.

Participate in your local neighborhood

I’m naturally still the weakest in this area. I’ve been a global guy all of my life and I still gravitate toward news and events that are happening half-way around the world. I’m also an introvert with an natural aptitude for digital communication (read “nerd”). Furthermore I come from a more isolationist religious background where there is a suspicion of “the world.”

Clark definitely was adamant about maintaining a distinct moral and spiritual core centered on Christ and his presence and teachings. And Clark also was able to keep a global focus where he was concerned about the global church and his global neighbors.

But Clark also was very forceful in his advocacy of being more present in the local (geographical) neighborhood. His efforts involved inviting neighbors over, organizing community events, joining local neighborhood and school boards, voting, and being a bridge between the church and the neighborhood.

It is an obvious truth. We can’t truly love our neighbors if we’ve never met them.

This is a good reminder in a world of digital “communities” and social media as well. Social media is so much more interesting and stimulating than getting out in bad weather to chat with a neighbor about their new job or a recent divorce. Real life is hard work. Social media is not. But the rewards of doing the hard work in real life far outweigh the superficial rewards that come from our participation in the digital realm.

Clark was a tireless advocate for local engagement and participation. I’d like to keep growing in this area as well. I want to be a better neighbor and a more engaged citizen. I want to know my neighborhood and my neighbors better so that I can be a more loving and helpful presence.

I’m sure there will be other lessons that come to mind over the course of the next months and years. But I’m thankful to God for the points I’ve mentioned above. Clark was a pretty special guy.

Did you know Clark? What lessons did you learn from him?

One thought on “Lessons Learned from Clark Blakeman”

No images found!
Try some other hashtag or username

I am a follower of Jesus Christ and passionate about proclaiming and displaying the Kingdom of God around the world. I'm married to lovely Erin and I'm the dad to three wonderful kids.
I'm the Founder and Director of Lahash International and I love working with friends to help transform lives and be a part of hope and light in this world! I've been profoundly impacted by the faith and actions of my brothers and sisters in East Africa and want to partner with the local church in that region to promote spiritual growth and compassionate outreach.

Founder/Director of Lahash (https://t.co/inoQFTd1Qo). I ❤️ my wife, kids, photography, traveling, Africa, the outdoors, shalom, and the Messiah Jesus.

The other day my counselor started tearing up while sharing some of the pressure she is under right now. I spent a good 5 minutes trying to speak some hope and encouragement back into her.

Evangelicals, Sin is crouching at your door.

It's a Christmas miracle! Biden complimenting Trump - and Trump complimenting Biden. I'm down for this late-breaking 2021 surprise! 😆
https://www.businessinsider.com/trump-says-very-tough-criticize-biden-complimented-warp-speed-vaccine-2021-12